To share your memory on the wall of Thomas LaFlamme, sign in using one of the following options:

Print
Thomas A. “Tucker” LaFlamme, 74, a resident of Ethan’s Way, Bennington died unexpectedly following a brief illness on Monday, March 9, 2020 at his residence.

Born in Bennington on June 18, 1945, he was the son of the late Walter J.... Read More
Thomas A. “Tucker” LaFlamme, 74, a resident of Ethan’s Way, Bennington died unexpectedly following a brief illness on Monday, March 9, 2020 at his residence.

Born in Bennington on June 18, 1945, he was the son of the late Walter J. LaFlamme and the former Yvonne (Lalumiere) LaFlamme who survives. Tommy received his education at Sacred Heart School and the former Red Brick School in Shaftsbury.

In earlier years Tommy was employed at the former Knotty Pine Restaurant in Bennington. He later worked for many years at Karl’s Motor Sales on Depot Street and finally at Morrison Sales & Service until the time of his retirement.

Tommy’s favorite pastimes were hunting and riding his bike around town. In earlier years he was a member of the Putnam Hose Company, Bennington Fire Department.

Private funeral services will be held at the convenience of the family.

Burial will take place in the family lot in Park Lawn Cemetery, Bennington.

Should friends desire donations in Thomas LaFlamme's memory may be made to the Bennington County Meals Program through the office of the Mahar & Son Funeral Home, 628 Main Street, Bennington, VT 05201.

To send flowers to the family or plant a tree in memory of Thomas A. LaFlamme, please visit our Heartfelt Sympathies Store.

We encourage you to share your most beloved memories of Thomas here, so that the family and other loved ones can always see it. You can upload cherished photographs, or share your favorite stories, and can even comment on those shared by others.

Posted Mar 13, 2020 at 05:23pm
My husband Dave and I met Tom and Barb through the CB radio years ago. They used to invite us to their trailer on Depot Street for coffee and we picked them up and took them on rides a few times and to the drive in movies with us. Years later I was also Barbs' nurse at Weston Hadden. I was always impressed with how devoted he was to Barb. He was there every day to see her. He was a kind and gentle man and I'm glad we had the opportunity to know him and call him a friend. Our sincere sympathy to his family during this time.
Comment Share
Share via:
MB

Posted Mar 13, 2020 at 08:32am
I know very few people that had Tommy's strength and perseverance. I remember him visiting his wife every day. NO MATTER WHAT !. Rain, snow, wind, sleet. Everyday he would go. He loved her so much. Now they are together again. Anyone who knows him, knew life didn't treat him fairly. But he always rose above it. I admired that about him.
Rest in peace my friend.
Comment Share
Share via:
JM

Posted Mar 11, 2020 at 07:08pm
So very sorry to read of Tommy’s death. John always enjoyed knowing him at Morrison’s.
He was such a kind man, and I enjoyed seeing him riding his bike around town. God bless him and his whole family. Sincerely, John and Jeannie Mook
Comment Share
Share via:
ES

Posted Mar 11, 2020 at 11:41am
Tommy was a very loyal member of our team at Morrison Automotive. He was always the first person there to make sure the dealership was in tip top shape. I'm heart broken to learn of his passing and my sincere condolences to the family and many friends. RIP Tommy......proud to have known and worked with you.
Ed Smith
Comment Share
Share via:
CG

Thank you so much for your kind words! Tommy would be so proud to know how many people thought so highly of him! He prided himself on being a hard worker! He will be missed! Claire 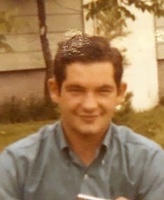