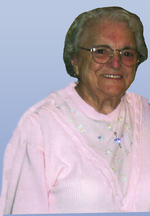 Theresa R. Boutin, 96, a former resident of Division Street, died Saturday, October 24, 2020 at the Centers for Living and Rehabilitation following a long illness.

Born in Bennington on November 4, 1923, she was the daughter of the late Eugene D. Betit Jr. and Matilda (LaFrancois) Betit. She received her education at Sacred Heart School and St. Josephs Business College in Bennington.

In earlier years Theresa was employed at E.Z. Mills and later for many years at Union Carbide Corporation until her retirement in 1986.

Theresa was life long member of Sacred Heart St. Francis de Sales Church and a member of St. Anne’s Society at the church. She had also been a member of the VFW Post 1332 Auxiliary and the Bennington Senior Citizens Club.

Friends may call at the funeral home Thursday from 10:30 a.m. until the time of the service.

Should friends desire memorial contributions in Theresa Boutin’s memory may be made to Sacred Heart St. Francis de Sales Church through the office of the Mahar & Son Funeral Home, 628 Main Street, Bennington, VT 05201.