To share your memory on the wall of Ronald White, sign in using one of the following options:

Born in Shaftsbury on September 10, 1940, he was the son of the late Eber and Edna (Labshere) White. W... Read More
EAST ARLINGTON

Born in Shaftsbury on September 10, 1940, he was the son of the late Eber and Edna (Labshere) White. Whitey received his education in Arlington and was a graduate of Arlington High School.

He was employed at Orvis Company in Manchester for 38 years as a bamboo fly rod builder where he was revered for his knowledge, craftsmanship and vision. Over the years Whitey received several awards recognizing his expertise at his craft.

Whitey enjoyed all sports but was an avid golfer. He was a member of the Arlington Golf Association and was known for hosting rousing Card Games.

Survivors include his partner and best friend of 20 years, Pam Clough of East Arlington; two sons, Jeffrey White of North Bennington and Daniel (Sarah) White and their son John of Liverpool, NY; a sister, Donna (Carl) Brown of Rutland and several nieces, nephews and cousins.

Whitey was predeceased by six sisters and eight brothers.

Graveside committal services will be held on Saturday, October 17, 2020 at 1:00 p.m.at Scottsville Cemetery in Danby, VT

Should friends desire memorial contributions in Whitey's memory may be made to the Vermont Heart Association through the office of the Mahar & Son Funeral Home, 628 Main Street, Bennington, VT 05201.

To send flowers to the family or plant a tree in memory of Ronald O. White, please visit our Heartfelt Sympathies Store.

Receive notifications about information and event scheduling for Ronald

We encourage you to share your most beloved memories of Ronald here, so that the family and other loved ones can always see it. You can upload cherished photographs, or share your favorite stories, and can even comment on those shared by others. 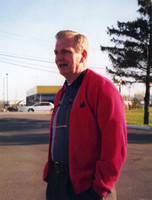