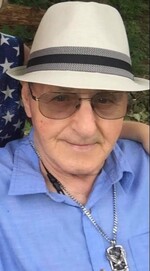 Robert L. Hill Sr., 81, a life-long resident of Bennington died peacefully Tuesday, February 16, 2021 at the home of his sister-in-law in Hoosick, NY following a brief illness.

Born in Bennington on June 16, 1939 he was the son of the late Aldis and Mildred (Greene) Hill. He received his education in Bennington.

In his early years, Bob served with the National Guard. He was employed at the former BenMont Papers; the Bennington Brush Co.; and UST. He will be most remembered by the community for his years at Walmart in Bennington. He was known as "Sticker Bob" and children would seek him out for a smiley-face sticker.

Bob will always be remembered for his kindness - not because of who the person was, or what they could do for him in return, but because of who he was - a gentle and kind man.

Survivors include his son, Robert Hlil Jr. of Bennington; two brothers, William (Kathy) Hill of White Creek, NY and Bradley Hill of Bennington. Four sisters, his twin Rosemary Bourn, Lois (Ted) Eggsware, Joan (Donald) Facto all of Bennington, and June (Donald) Kuta of Florida. He is also survived by many, many nieces, nephews and cousins.

Besides his wife and parents, Bob was predeceased by three sisters, Trina Olson, Kathy McCart, and Shirley Hill; and by two brothers, Aldis Hill and Hollis Hill.

Friends are invited to pay their respects to the family on Thursday, February 25, 2021 from 2:00 to 3:30 p.m. at the Mahar & Son Funeral Home, 628 Main Street, Bennington. A service will be offered at 3:30pm by Reverend Michael Twardy of the Bible Baptist Church.

Should friends desire contributions in Bob’s memory can be made to the Vermont Heart Association through the office of Mahar and Son Funeral Home.