To share your memory on the wall of Robert Cole, sign in using one of the following options:

He was born in Trenton, New Jersey March 10, 1917. He was the son of the late Charles and Abigail (Hunt) Cole of Princeton, New Jer... Read More
Robert W. Cole, 102, a resident of Shaftsbury, Vermont died Thursday November 28, 2019 at his residence.

He was born in Trenton, New Jersey March 10, 1917. He was the son of the late Charles and Abigail (Hunt) Cole of Princeton, New Jersey. After the death of Charles his mother married Henry E. Kamping of Brooklyn, NY. He grew up and attended local Brooklyn schools.

Bob was a member of the New York State Guard prior to serving in the Army Transportation Corps from 1942-1946.

In 1954 Bob received a BS Degree in Management from Rutgers University in New Brunswick under the “G.I. Bill”. In 1957 he was employed at the Stanley Tool, Atha Plant in Newark, New Jersey as Personnel Manager. In 1972 he was transferred to the Stanley Tool Eagle Square Plant in the same capacity and retired in 1981.

He was an active volunteer with the New Brunswick Chapter, American Red Cross as Motor Corps driver, Board Member and Chapter Chairman. In Vermont he was an active RSVP volunteer with the AARP Tax Counseling for the Elderly, driving for the American Cancer Society Road to Recovery Program and the Vermont Association for the Blind and Visually Impaired. He was a Board Member of the Southwestern Vermont Council on Aging.

Survivors include a dear friend, Lorraine Gosse and her children of Philadelphia, Pennsylvania. Bob was pre-deceased by another dear friend, Madeline (Midge) Maiorana of Toms River, New Jersey. Other survivors include Madeline’s children of New Jersey, his very close friends and neighbors, Andy and Theresa Crosier of Shaftsbury, as well as many of his dedicated caregivers from the Veterans Administration and the Bennington VNA.

A graveside service will be held at the family lot at Saint Peters Cemetery in New Brunswick, New Jersey on Friday December 6, 2019 at 1:00 p.m.

If friends desire contributions in memory of Robert W. Cole may be made to the Cancer Center Community Crusaders through the office of the Mahar and Son Funeral Home 628 Main St. Bennington, VT 05201. Guest book condolences may be made at www.maharandsonfuneralhome.net.
Read Less

To send flowers to the family or plant a tree in memory of Robert W. Cole, please visit our Heartfelt Sympathies Store. 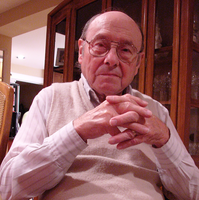