To share your memory on the wall of Richard Lyon, sign in using one of the following options:

Print
Richard M. Lyon, 72, a resident of Myers Road in Shaftsbury, VT died Saturday July 4, 2020 at the Centers for Living and Rehabilitation in Bennington following a brief illness.

He was born in Bennington, VT February 26, 1948. He was th... Read More
Richard M. Lyon, 72, a resident of Myers Road in Shaftsbury, VT died Saturday July 4, 2020 at the Centers for Living and Rehabilitation in Bennington following a brief illness.

He was born in Bennington, VT February 26, 1948. He was the son of the late Francis James Lyon and Virginia (Roberts) Lyon. Richard received his education in Bennington and was a 1966 graduate of Bennington Catholic High School.

Richard served in the United States Air Force in Vietnam.

In earlier years Dick was employed at the New Englander Restaurant and for many years he had been employed at the Bijur Lubricating Company in Bennington from which he retired.

Dick was very active in his community. He was a member of the Bennington Moose Lodge, the American Legion Post 13, the Bennington Lodge of Elks # 567 and the Norshaft Lions Club. Dick was also very handy. There wasn’t anything he couldn’t make or fix. He built his home. He also enjoyed restoring vintage cars and going to car shows.

Survivors include his fiancé, Conchita “Chichi” Gyeszat of Shaftsbury. A sister Joan Carpenter and her husband Michael of Dover, Delaware. A brother, James Lyon and his wife Jean of Plymouth, Indiana. Along with many nieces, nephews and cousins.

The funeral will be held from the Mahar and Son Funeral Home on Friday July 10, 2020 at 12:15 p.m. with a prayer and then from Saint John the Baptist Catholic Church at 1:00 p.m. where the Liturgy of Christian Death and Burial will be offered.

The burial will take place in the family lot at the South Shaftsbury Cemetery.

Friends may call at the Mahar and Son Funeral Home on Friday from 10:30 a.m. until 12:15 p.m. when the family will be in attendance.

To send flowers to the family or plant a tree in memory of Richard M. Lyon, please visit our Heartfelt Sympathies Store.

Receive notifications about information and event scheduling for Richard

Darlene, Sandi and Kevin, Tricia Carpenter, and other have sent flowers to the family of Richard M. Lyon.
Show you care by sending flowers

Posted Jul 09, 2020 at 10:28pm
We are saddened by the passing of our cousin Dickie. We all have such great memories of summer vacations spent at Gramma Lyons and hanging out with Jimmy, Joan and Dickie. I remember climbing up in the tree house next door with Dick and going swimming in the local swimming hole. Dick always had cool projects, like the old radios he turned into secret intercoms. His cleverness for building things started at a young.

We're sorry we won't be at the service tomorrow but our thoughts and prayers will be with you.

Posted Jul 09, 2020 at 09:08pm
Our thoughts and prayers are with our dear cousin and all his friends and family.

Darlene, Sandi and Kevin purchased flowers and planted a memorial tree for the family of Richard Lyon. Send Flowers

Posted Jul 08, 2020 at 12:18pm
Rest in peace, Uncle Dickie. We love you and will miss you forever. You meant the world to so many and we cherish the time we all had with you. Rest with the angels. With love.
Comment Share
Share via:
D

Druart purchased flowers and planted a memorial tree for the family of Richard Lyon. Send Flowers 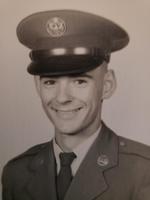