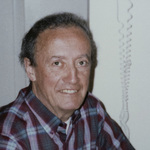 He married the former Dorothy Leonard in Bennington, Vermont on April 7, 1951 and spent most of their years raising their family in Scotia, NY. Mrs. Rowe died January 16, 2015.

For 38 years Paul had been employed as an air conditioner technician at General Electric in Schenectady, NY.

He was a member of the Knights of Columbus in Scotia, New York and the Plumbers and Steam Union in Schenectady, NY. His love and care of his family were his priority in life. He enjoyed camping, traveling, bluegrass music and all things Irish. He was an avid reader and specifically found mystery novels of interest. His unfailing optimism was a reflection of his deep faith.

Survivors include a daughter and son in law, Constance and Scott Youmans of Phoenix, Arizona and a son and daughter in law, Robert and Claudia Rowe of Cary, North Carolina. Three grandchildren, Jennifer, Allison and Kevin Rowe. Along with several nieces, nephews and cousins. He was pre-deceased by a brother Robert and three sisters Eleanor, Shirley and Patricia.

Due to the Covid 19 situation there will be no calling hours or funeral services at this time. A memorial mass will be held at a later date.

The burial will take place in the family lot at Maple Grove Cemetery in Hoosick Falls, NY.

If friends desire contributions in memory of Paul D. Rowe may be made to Transitions Life Care Hospice Home through the office of the Mahar and Son Funeral Home 628 Main St. Bennington, VT 05201. Guest book condolences may be made at www.maharandsonfuneralhome.net