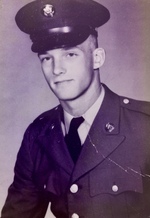 He was born on Nov.17, 1948 in East Orange, NJ. The family moved to Bennington when he was 4 years old. He attended Sacred Heart School & was in the last graduating class of Bennington Catholic High School in 1966. He was a three sport athlete playing football, baseball, & basketball.

Shortly after graduating from high school in 1966, he enlisted in the US Army. He spent two tours in Vietnam from 1967-68. He later joined the Vermont Army National Guard serving in Company C in Bennington & Headquarters Company in Rutland, Vt. until his retirement. In all he proudly served his country for over 30 years.

He was very active in the American Legion Post 13 & served as Commander, County Commander, 4th District Commander and Southern area Commander for the State. He loved Post 13 Legion baseball & never missed a game and made sure to bring food and cold drinks for the team when they had double headers. He was also a lifelong member of the VFW and served as a trustee & treasurer at the F.O.E.

He was proud to have been a part of a Veteran’s Honor Flight recently, where he & many other veterans were flown to Washington, DC to visit Arlington National Cemetery, the Vietnam Wall & the Korean & WWII Memorials. They were “finally” welcomed home on their return flight in Albany, with a parade & family cheering them on.

His greatest joy would come from being the father of his three daughters and grandfather (“Poppy”) to his five grandchildren. He is survived by his daughters Merri (Dick) Mattison of Eagle Bridge, NY, Terri (Mark) Canavan of Lake Luzerne, NY, and Kerri Moore of Alpharetta, Ga. His grandchildren Ellen & Lucas Mattison, Shea Canavan & Brandon and Tracey Mattison.

He is also survived by his 10 siblings Thomas F. Moore III, James J. Moore, Mary Moore-Corey, Margaret Outwater, Theresa Moore, Matthew Moore, Maureen Moore-Bond, Kathleen Moore, Laura Moore & Joseph Moore. He is also survived by and very close to his uncle, cousins, many nieces and nephews who were all very special to him.

Arrangements are under the care of EP Mahar & Son and memorial services will be at a later date. Burial will be at Arlington National Cemetery.

Donations in his memory can be made to American Legion Post 13 or Veteran’s of Foreign Wars Post 1332 through the office of Mahar & Son Funeral Home, 628 Main Street, Bennington, VT 05201.