To share your memory on the wall of Monserrate Ghigliotty, sign in using one of the following options:

She was born in Puerto Rico on April 25, 1924 and was the daughter of the late Alejand... Read More
Monserrate Ghigliotty, age 95 a resident of Bennington, and formerly of Jacksonville, VT, died on Tuesday, January 14, 2020 following a brief illness.

She was born in Puerto Rico on April 25, 1924 and was the daughter of the late Alejandro and Anna Rodriguez. She received her education in Puerto Rico, and moved to the United States during her teens. Her family settled in Staten Island, NY. She was married to Charles Toro, who has predeceased her. In later years she married William Ghigliotty, who has also predeceased her. While living in Staten Island, she was employed as a Seamstress/Finisher at Harry Irwin, Inc. a men’s suit manufacturing company. After relocating to Vermont, she became an avid Casino attendee, and tag sale collector. Monserrate enjoyed collecting antique dolls, jewelry and enjoyed attending auctions. She loved growing plants, gardening, scratch tickets and butterflies.

Besides her two husbands, she is predeceased by one son Charles Toro, one grandson Michael Chinnici and two sisters and a brother.

A prayer service will be held on Saturday, January 18, 2020 at 10:30AM at the Mahar and Son Funeral Home followed by a Mass of Christian Death and Burial at Sacred Heart St. Francis de Sales Church in Bennington at 11:00AM.
Friends may call at the Mahar & Son Funeral Home Friday from 6:00 to 8:00 p.m.

Memorial contributions can be made to the Cancer Center Community Crusaders through the office of the Mahar and Son Funeral Home, 628 Main Street, Bennington, VT 05201.

To send flowers to the family or plant a tree in memory of Monserrate Ghigliotty (Rodriguez), please visit our Heartfelt Sympathies Store.

We encourage you to share your most beloved memories of Monserrate here, so that the family and other loved ones can always see it. You can upload cherished photographs, or share your favorite stories, and can even comment on those shared by others. 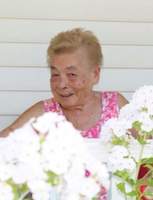