To share your memory on the wall of Michael Saccio, sign in using one of the following options:

Satch was born February 2, 1972 in San Diego, CA. He grew up on Long Island in Levittown, NY, graduating from Island Trees High School in 1990. He attended Binghamton University (SUNY), earning a bachelor’s degree in Literature and Creative Writing in 1994, where he was a proud member of the Pi Lamda Phi fraternity. He went on to earn a master’s degree in English Education from New York University.

After working for companies based out of Long Island and NYC for eight years in software education and support, he was lured off the Island by the love of his life, Schuster. The two traveled the country together for a year in a 1975 Airstream that they bought and renovated, hiking the mountains and deserts of the national parks, before settling in Bennington, VT. They were married in October 2004. Over the next four years, the couple welcomed three wonderful daughters into their lives. Satch opted for early retirement from the corporate world, devoting his days to raising his daughters. He was an incredible father, and his legacy will live on in his girls.

Satch was a beloved friend to so many. His uncanny humor, kind and welcoming spirit, musical proclivity, “ManGames” gatherings, tales from his adventures in property management, seemingly endless stories of collegiate antics, elementary school talent show accompaniments, “Mancation” escapades, “Satchapalooza” celebrations, and footnoted holiday letters will never be forgotten. He loved his life. He loved his family. He loved his friends. Satch did not squander his days on this planet, and he died without regret. He will be missed by many.

Satch is survived by his wife, Nancy Schuster, and three daughters, Ella, Aubrey and Charlotte Saccio. He is also survived by his parents, Frank and Maureen Saccio of North Babylon, NY; brother Christopher Saccio and his fiancée Rosie Torres of Crompond, NY; in-laws Kurt and Bootsy Schuster, and Ed and Kathy Cooper, all from Westlake, OH; niece and nephews Andrew, Rachel and Matthew Cooper, and Blu Torres; numerous aunts, uncles and cousins; and without a doubt, more friends than most can even imagine.

In lieu of flowers or gifts, donations can be made to the Dana Farber Cancer Institute or Bayada Hospice in his memory. There will be no formal calling hours or funeral. A celebration of Satch’s life will be held in the near future.
Read Less

To send flowers to the family or plant a tree in memory of Michael C. Saccio, please visit our Heartfelt Sympathies Store.

There are no events scheduled. You can still show your support by sending flowers directly to the family, or planting a memorial tree in memory of Michael C. Saccio.
Visit the Heartfelt Sympathies Store

The Sawyers sent flowers to the family of Michael C. Saccio.
Show you care by sending flowers

Posted Mar 29, 2020 at 03:23pm
You are often in my thoughts and prayers. I am deeply sorry. Please let me know if you need anything. Xoxo, Renee Lewis

Flowers were purchased for the family of Michael Saccio. Send Flowers

Posted Mar 12, 2020 at 04:45pm
Our thoughts are with you and those three beautiful girls. Praying for strength and peace for you all in the coming days.

Posted Mar 12, 2020 at 10:55am
I am so sorry for your loss. We only met a handful of times but feel like I knew him forever and it was because of the company he kept!

The Sawyers purchased flowers and planted a memorial tree for the family of Michael Saccio. Send Flowers

Posted Mar 11, 2020 at 04:11pm
Thinking of you and the girls, and sending sincere heartfelt condolences at this most difficult time. Satch sure fought harder than any person i have ever known, Truly a Superman. He has left an incredible legacy, and won't soon be forgotten... I feel honored to have "known" him through you. I know he was your everything, and you have so many memories that live on. Know that i am here for you, anytime, in the days ahead. Rest easy and peacefully Satch. .
Comment Share
Share via:
MJ

Posted Mar 11, 2020 at 12:05pm
Dr. Schuster, My deepest condolences go out to you and your family. You are in my thoughts and prayers during this incredibly difficult time.
Comment Share
Share via:
JG

Mikey, my dear friend, it seems like yesterday that we were riding big wheels down your driveway. I’m fortunate to have known you as long as I have. I will never forget you - your memory will be with me forever. Until we meet again. Joe 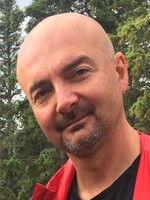