To share your memory on the wall of Michael Burdick, sign in using one of the following options:

He was born in Bennington on March 29, 1967 and was the son of Ronald Burdick and Gloria (Barnhart) Abbott. He is a graduate of Hoosick Falls High School, class of 1985. He married the former Teresa (Terri) Monroe on September 5, 2009. They were best of friends.
Over the years, he had been employed at Sure-Seal Roofing Company, Home Depot, Hannaford in Bennington, and was working at Miles Lumber in Arlington, Vermont. He was a well known D.J. in the area, playing at various venues including the old Ramada Inn and the 3rd Base and Backstreet in Hoosick Falls, NY. He loved dealing with electronics, and was a master sound technician. He was an avid motorcycle rider, who loved his 1000CC bike. He enjoyed bowling and playing the drums. He lived life to the fullest, and fought with all his might against his physical obstacles.

Besides his wife, he is survived by his mother, Gloria Abbott and her husband Robert of Buskirk, NY, his two brothers: Mark (Michele) Burdick and Matthew Burdick. He leaves his father-in-law, Lewis Monroe, Jr. (Sonny) of North Hoosick. Michael is also survived by several nieces and nephews. Mike is also survived by his beloved cats; Molly, Wembley and Maggie. He is predeceased by his father, Ronald Burdick and his mother-in-law, Kathleen Monroe. The family would like to acknowledge all of Mike’s friends who were so diligent during this difficult time in offering their support.

Funeral services will be held on Thursday, November 14, 2019 at 2:00PM at the Mahar and Son Funeral Home, in Bennington. Friends can call at the funeral from 12:00PM until the time of the service. Interment will follow in Park Lawn Cemetery in Bennington.
Read Less

To send flowers to the family or plant a tree in memory of Michael Scott Burdick (Burdick), please visit our Heartfelt Sympathies Store.

Posted Nov 21, 2019 at 08:06am
We are so very sorry to hear about Mike. Such a brave person. Our hearts and prayers go out to you all.
Comment Share
Share via:
BF

Posted Nov 13, 2019 at 11:40am
Terry and family,
I am so sorry to read this. My heart is broken for you. Let the many happy memories you have bring you comfort and solace.
Comment Share
Share via:
LW

Posted Nov 13, 2019 at 02:20am
So sorry to read of Mike's passing. I worked with him many years ago and found him to be a caring, honest and thoughtful person. May you all cherish the many good memories, as I'm sure Mike made a "few". Rest In Peace, Mike...
Comment Share
Share via:
JG 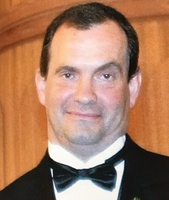