To share your memory on the wall of Michael Borden, sign in using one of the following options:

Print
Michael “Mikey” P. Borden, a resident of Route 346 in N. Pownal, Vermont died Saturday September 19, 2020 at his residence surrounded by his family after a long battle with Dementia.

He was born in Bennington, Vermont February 12, 19... Read More
Michael “Mikey” P. Borden, a resident of Route 346 in N. Pownal, Vermont died Saturday September 19, 2020 at his residence surrounded by his family after a long battle with Dementia.

He was born in Bennington, Vermont February 12, 1962. He was the son of the late Richard G. Borden and Teresa (Kelley) Borden who survives. Mike received his early education in Shaftsbury and was a 1980 graduate of Mount Anthony Union High School.

Mike served 25 plus years in the United States Army and National Guard. His tours included Operation Desert Storm and Operation Iraqi Freedom. He was most recently employed as a truck driver for J & T Trucking in Bennington, VT.

He married the former Jane Bisson on August 1, 2004 in Adams, MA.
Mike's enjoyment came from fly-fishing, vacationing at the family home in York Beach, ME and anything and everything Boston Red Sox Baseball.

Survivors include his wife, Jane Bisson-Borden of N. Pownal, Vermont. His three children Jared Borden (Katie), Joshua Borden (Summer) and Jessica Cox (Haley) all of whom reside in Florida. His mother, Teresa Borden of Shaftsbury, a brother Kevin Borden of Shaftsbury and a sister Kim Wick (Larry) of Pownal, VT . Mike is also survived by six grandchildren Isla, Finley, Avery, Elias, Sadie, and Ellie, along with several nieces and nephews.

A special thanks to Hannah for your friendship and care.

Friends may call at the Mahar and Son Funeral Home on Thursday September 24, from 4:00 to 8:00 p.m. when the family will be in attendance.

The service with military honors will be offered at Saint John’s Cemetery in North Bennington on Friday September 25, at 2:00 p.m. You can watch this service via Zoom by this link: http://bit.ly/MichaelBordenZoom

Should friends desire, contributions in memory of “Mikey” P. Borden may be made to the Cardinal Point Dementia Unit at the Vermont Veterans Home or Second Chance Animal Shelter through the office of the Mahar and Son Funeral Home 628 Main St. Bennington, VT 05201.

Guest book condolences may be made at www.maharandsonfuneralhome.net.
Read Less

To send flowers to the family or plant a tree in memory of Michael P. Borden, please visit our Heartfelt Sympathies Store.

Posted Sep 23, 2020 at 07:07pm
My heart goes out to all of the Borden family. I grew up with Mike and Kevin in Shaftsbury. I also served with Mike in Upstate New York years ago. More recently all communication has been through Facebook, but that has been a couple of years now. Despite the time and distance it still hurts. There will always be a place in my heart for Mike and he will be missed.
Scott Elliott
Comment Share
Share via:
SF

Posted Sep 22, 2020 at 10:40pm
God bless his family and friends. Rest in Peace Mikey. Thank you for your service. The Red Sox are kicking it tonight. Peace.
Comment Share
Share via:
JT

Posted Sep 22, 2020 at 02:51pm
Please accept our most heartfelt sympathies for your loss... Our thoughts are with you and your family during this difficult time.

Posted Sep 22, 2020 at 09:35am
Wishing you peace to bring comfort, courage to face the days ahead and loving memories to forever hold in your hearts. 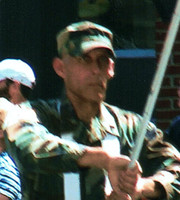