To share your memory on the wall of Marian Matteson, sign in using one of the following options:

Marian was born on February 22, 1936 in Bennington, Vermont, daughter of the late Katherine (Muntz) and Edgar J. Matteson, Sr. She attended the North Bennington Schools and graduated from Wellesley College, Wellesley, Massachusetts in 1958 earning a BA in Political Science.

Marian was selected by the U.S. Department of Personnel as a Federal Management Intern and served a one year internship in the United States Department of the Interior, Bureau of Reclamation in Washington, D.C. She worked for one year on Capitol Hill as legislative assistant to Congressman Harris B. MacDowell of Delaware.

In 1960, Marian married Robert E. Cummings. During their twelve years together, they had three children, she worked in Bob’s law office, and served on the Mt. Anthony School Board from 1964 to 1968. It was during this time that voters approved funding, and the new school was built. In 1973, she opened and operated Up and Downhill, a bicycle and cross country ski shop, in The Big Mill.

Marian moved to Montpelier in 1975, where, during the next eight years, she held a number of positions at the Governor’s Commission on the Administration of Justice, the Office of the Defender General, and the Public Service Department. In the late seventies and early eighties, she served as Special Assistant to the Commissioner, Director of Social Services, Deputy Commissioner, and Acting Commissioner of the Department of Social and Rehabilitation Services.

In 1983, Marian left Vermont, moved to Boston to work in the central office of the Massachusetts Department of Mental Health. She returned to Vermont in 1987 to operate a management consulting business, Northworks, which offered catalysts for change in business and government.

Marian was a woman of words, loved language, learning, and animals of all kinds. She was a fierce advocate for the many causes she championed and for her family and friends.

Donations can be made in Marian’s name to the Second Chance Animal Shelter in Shaftsbury, Vermont through the office of Mahar and Son Funeral Home, 628 Main Street, Bennington, VT 05201.

A private celebration of Marian's life will be held in the spring.
Read Less

To send flowers to the family or plant a tree in memory of Marian F. Matteson (Matteson), please visit our Heartfelt Sympathies Store.

There are no events scheduled. You can still show your support by sending flowers directly to the family, or planting a memorial tree in memory of Marian F. Matteson (Matteson).
Visit the Heartfelt Sympathies Store

We encourage you to share your most beloved memories of Marian here, so that the family and other loved ones can always see it. You can upload cherished photographs, or share your favorite stories, and can even comment on those shared by others. 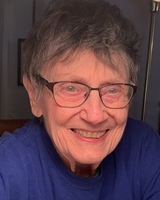