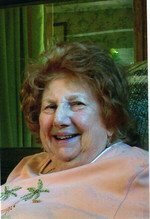 She was born in Bronxville, New York on July 2, 1933, and was the daughter of the late Anthony and Dora (Bargellini) Mazzetti. The family moved to Bennington when she was young. Marfisa received her education in Bennington, attending St. Francis Academy and graduating from Bennington High School. She was employed at New England Telephone as a Telephone Operator in Bennington, and as Group Manager, traveling to Brattleboro and Keene, New Hampshire, until she retired in 1989 to take care of aging parents.

She was a Member of the Telephone Pioneers of America. Marfisa enjoyed cooking for her family and loved holiday gatherings. She enjoyed spending time with her many friends and former co-workers, at their monthly luncheons. She also enjoyed ice skating, gardening, drawing and knitting.

Marfisa was especially fond of cats and crows, and the way that she interacted with animals was a special gift.

Marfisa was a great woman who will live on in the memories of all who have had the privilege to have known her.

Services will be held privately by her family. Memorial contributions may be made to the Second Chance Animal Shelter, and/or Sacred Heart School through the Mahar and Son Funeral Home in Bennington.

Marfisa was very much loved and will be greatly missed.