Obituary for Kathleen A. Davey (Rowe) 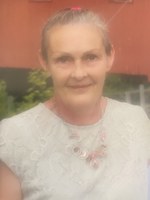 Born in Bennington on August 28, 1961, she was the daughter of the late roger Rowe and Pauline (Lemieux) Torrey.

Kathy received her education in the Bennington schools and was a 1981 graduate of Mt. Anthony Union High School. In earlier years she was employed at Mace Security and later for several years at Tractor Supply for several years until the time of her death.

Kathy was a lover of all animals but especially her dogs.

There will be no visiting hours.

Should friends desire memorial contributions In Kathy’s memory may be made to the Second Chance Animal Shelter through the office of the Mahar & Son Funeral Home, 628 Main Street, Bennington, VT 05201.