To share your memory on the wall of Joseph Mezowicz, sign in using one of the following options:

Print
Joseph A. Mezowicz, age 86, a resident of the Vermont Veterans Home in Bennington, Bennington died on January 23, 2020.

He was born in New York City, NY om January 24, 1933. Joseph was the son of the late Anthony and Stella (Krupa) Mezow... Read More
Joseph A. Mezowicz, age 86, a resident of the Vermont Veterans Home in Bennington, Bennington died on January 23, 2020.

He was born in New York City, NY om January 24, 1933. Joseph was the son of the late Anthony and Stella (Krupa) Mezowicz. He received his education in New York City. Joseph served in the Army during the Korean War. He married the former Auleta Welch Thompson, on April 2, 1978, on Cape Cod, MA. Mrs. Mezowicz predeceased him on April 25, 2005.

Survivors include: one step-son: Donald Thompson (Helen) and one step daughter-in-law, Norma Thompson. He leaves four step-grandchildren: Christopher Thompson, Daniel Thompson, Lisa Midura, and Danielle Thompson. He is also survived by his Goddaughter and niece, Barbara Wetherell, and one grandnephew, Brandon Wetherell.

Besides his wife, Joseph is predeceased by one step-son, Walter Thompson, and two sisters: Jane Moore and Mary Siedel.

Graveside funeral services will be held in the spring of 2020 at the Park Lawn Cemetery in Bennington.

The Thompson family would like to thank the nurses and staff at the Vermont Veterans Home for the excellent care he received during his stay there.

Memorial contributions may be made to the Bennington Rescue Squad or the Vermont Veterans Home through the Mahar and Son Funeral Home, 628 Main Street, Bennington, VT 05201.

To send flowers to the family or plant a tree in memory of Joseph A. Mezowicz (Mezowicz), please visit our Heartfelt Sympathies Store.

Receive notifications about information and event scheduling for Joseph

We encourage you to share your most beloved memories of Joseph here, so that the family and other loved ones can always see it. You can upload cherished photographs, or share your favorite stories, and can even comment on those shared by others.

Posted Jan 28, 2020 at 07:49am
When Joe was a resident at Cora B, he greeted me nearly everyday at the door. I worked with several clients at Cora B. Joe and I shared smiles and conversation. He tried to come off as a grump, but his soft side always shown through. 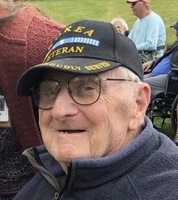