To share your memory on the wall of Joanne Keough, sign in using one of the following options:

Joanne Frances King Keough, 74, a former resident of Arlington, died peacefully surrounded by her family on Thursday, August 13, 2020 at Brookdale at Fillmore Pond in Bennington where she had resided for the past ten years.Read More
ARLINGTON

Joanne Frances King Keough, 74, a former resident of Arlington, died peacefully surrounded by her family on Thursday, August 13, 2020 at Brookdale at Fillmore Pond in Bennington where she had resided for the past ten years.

Joanne was born in Bennington at Putnam Memorial Hospital, now Southwestern Vermont Medical Center, on January 22, 1946, the daughter of John T. and Frances (Mann) King. She married Richard Keough on October 2, 1965. Joanne was a 1964 graduate of Arlington Memorial High School.

The funeral will be held from the Mahar & Son Funeral Home Wednesday, August 19, at 9:30 a.m. with a prayer and from Scared Heart St. Francis de Sales Church in Bennington at 10:00 a.m. where the Liturgy of Christian Burial will be offered.

Burial will take place in the family lot in St. Columban’s Cemetery in Arlington.

Should friends desire, memorial contributions in Joanne Keough’s memory may be made to either the Arlington Rescue Squad or the National Multiple Sclerosis Society through the office of the Mahar & Son Funeral Home, 628 Main Street, Bennington, VT 05201.

To send flowers to the family or plant a tree in memory of Joanne Frances Keough, please visit our Heartfelt Sympathies Store.

Receive notifications about information and event scheduling for Joanne

We encourage you to share your most beloved memories of Joanne here, so that the family and other loved ones can always see it. You can upload cherished photographs, or share your favorite stories, and can even comment on those shared by others.

Toni sent flowers to the family of Joanne Frances Keough.
Show you care by sending flowers

Posted Aug 18, 2020 at 03:11pm
Thoughts and prayers to Joanne's family. I will always remember our growing up years in Arlington and all the laughs and
fun we had . Joanne was always the center of our get togethers and spread the joy of laughter in whatever we were doing. I will forever remember her and our years at AMHS.
Comment Share
Share via:
KC

Posted Aug 18, 2020 at 12:26pm
I will always remember when we played a softball game at MSJ. After the game we stopped at McDonald's and Joanne got on the bus. She said "I'm here to take Susie to get a Prom Dress. I said "You can pick Susie up in Arlington and bring her back to Rutland to get her dress. Susie was going to the Prom with one of my nephews. The rule was "you ride to and from the game back to Arlington on the bus". Dick came to see me the next day and said "he didn't have a problem with what I did, but it had better stay that way for the remainder of the year. If it didn't, he would be back in to see me." My luck he didn't have to come back in to see me.
Comment Share
Share via:
KN

Posted Aug 17, 2020 at 01:30pm
We will always remember Joanne's welcoming giggle and how she and Dick were always the best dancers at the AMHS proms.
Ken & June Nicholson
Comment Share
Share via:
KC

Joan and I were so sorry to hear about your mom's passing. Your dad and mom were two of the most wonderful friends one could ever hope for, and we felt so blessed to be able to count them as such. The town of Arlington was a much better place because of Dick and Joanne, as they truly represented that beautiful community, and why it was such a wonderful place to live and raise a family in. Please know you are in our prayers, and we thank God for the good fortune to have known and counted them as such truly valued friends. They will be missed. Kerry & Joan Csizmesia
Comment Share
Share via: 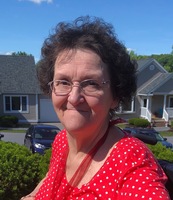