To share your memory on the wall of Jennie Jerome, sign in using one of the following options:

After a long battle with the effects of a life well lived, Jennie Hall Jerome, 74, passed away peacefully in her sleep on November 8th in Bennington, Vermont. Though Jennie spent her final years in Vermont, she lived most of her adult life in Florida, St John, US Virgin Islands, Nantucket island and RV’ing across the country.

Jennie was born to Jean Jerome (Bewkes) and William Travers Jerome, III in Washington DC on March 26, 1945. At a young age, Jennie had a sense for adventure and sport. Jennie’s love for the ocean and outdoors really showed when she paused a life as a public defender in Florida and left to cruise the Caribbean. Her passions were many – they included reading, cooking, swimming, sailing and debating on topics ranging from the proper pronunciation of a word to gerrymandering. Her focus later in life became environmental law and climate change. In her late 50s, she was so determined to make a change, she returned to school at Vermont School of Law for a Master of Law (LLM) to go along with her JD from Florida State University. She loved political discourse, in the early years as a flower child in the March on Washington or volunteering later in life canvassing poor, rural areas.

Monetary gain was never a focus for Jennie. To her many friends, Jennie is remembered as a good deed doer. She helped numerous St Johnians with their legal issues on a pro bono basis. She assisted the federal team that outlined the coastline for the protection and expansion of National Park waters. Using her legal expertise, Jennie was instrumental in setting up the “Friends of the Park”, an organization particularly close to her heart.

Jennie is survived by her two children, Sarah Spencer Farnsworth of Coronado, California and William McClure Waugh of Raleigh, North Carolina, three grandchildren, Morgan, Maggie and Gavin, brothers William Jerome of Shaftsbury, Vt, and, Lawrence Jerome of Skaneateles, NY and sister, Kate Coderre, of Bennington, Vt. She is surrounded in love by many adoring nieces and nephews who appreciated her big laugh, tasty dinners and stories from the road.

A Celebration of Life will be scheduled in the Spring/Summer of 2020 somewhere near the water.
Read Less

To send flowers to the family or plant a tree in memory of Jennie Hall Jerome (Jerome), please visit our Heartfelt Sympathies Store.

There are no events scheduled. You can still show your support by sending flowers directly to the family, or planting a memorial tree in memory of Jennie Hall Jerome (Jerome).
Visit the Heartfelt Sympathies Store

We encourage you to share your most beloved memories of Jennie here, so that the family and other loved ones can always see it. You can upload cherished photographs, or share your favorite stories, and can even comment on those shared by others. 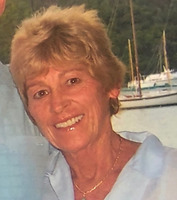