To share your memory on the wall of J. John LaPerle, sign in using one of the following options:

Provide comfort for the family by sending flowers or planting a tree in memory of J. John LaPerle

John was the owner of LaPerle’s Concrete Foundations and operated his business in the Bennington area for many years. John married Bernadette LaPerle in 2000 and they enjoyed spending time at their second home in North Port, Florida, attending Nascar races, and were frequent members of the Elks Club and Pownal Legion.

At the request of John there will be no calling hours or funeral services. Internment will be private. The family would like to acknowledge the staff at Brookdale Fillmore Pond for their kindness and professionalism during this time. Guest book condolences may be made at www.maharandsonfuneralhome.net.
Read Less

To send flowers to the family or plant a tree in memory of J. John Louis LaPerle, please visit our Heartfelt Sympathies Store.

There are no events scheduled. You can still show your support by sending flowers directly to the family, or planting a memorial tree in memory of J. John Louis LaPerle.
Visit the Heartfelt Sympathies Store

We encourage you to share your most beloved memories of J. John here, so that the family and other loved ones can always see it. You can upload cherished photographs, or share your favorite stories, and can even comment on those shared by others. 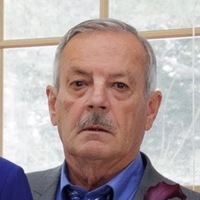