To share your memory on the wall of Irene Hilchey, sign in using one of the following options:

She was born in Bennington on February 8, 1924, and was the daughter of the late Leo and Helen (Winslow) Plante. She received her education in Bennington. Irene married Stephen F. Hilchey, on November 5, 1944. He predeceased her on December 23, 2004.

She was employed at Union Carbide from 1943 until 1981, retiring at 55 years old, after thirty-eight years of service.
She was an avid Norman Rockwell Collector. She had spent many winters in Florida with her husband. She enjoyed dancing, traveling and spending time with the family at her home. In earlier years she had enjoyed sewing and quilting.

Funeral services will be held in May of 2020. Memorial contributions may be made to the American Diabetes Association through the Mahar and Son Funeral Home in Bennington.
Read Less

To send flowers to the family or plant a tree in memory of Irene S. Hilchey (Plante), please visit our Heartfelt Sympathies Store.

We encourage you to share your most beloved memories of Irene here, so that the family and other loved ones can always see it. You can upload cherished photographs, or share your favorite stories, and can even comment on those shared by others. 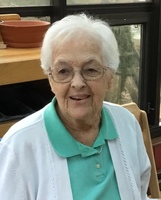