To share your memory on the wall of Ida Whitman, sign in using one of the following options:

Ida was born on November 14, 1942 in NY to the late Edward and Theresa Lavina (Sweet) Cook. She received her education in North Benn. School.

Ida enjoyed operating her own tag sale on a weekly basis. She also enjoyed family gatherings, cookouts, and country music. She had a passion for dancing, even from early childhood. She liked playing bingo. Her favorite color was blue. Ida really enjoyed walking the streets of Benn. in her latter years while living at Washington and Elm. She made many new friends. Her daughter Rose knows how much this meant to her. It fulfilled her need for companionship because she told Rose that the people really enjoyed her singing and dancing that she did as a past time. Rose and her family would like to say thank you for accepting their mother for who she really was as well as the affect you all had on her quality of living in her last years here on earth.

Ida grew up out in the country and was always a country girl at heart.

There will be no calling hours for Ida.

Graveside ceremony will be held on Tuesday October 27, 2020 at 1pm at Hinsdillville Cemetery in North Benn., VT. Ida will be buried with her son Arthur O’Dell, Jr.

Memorial contributions in memory of Ida June Whitman may be made to Mahar and Son Funeral Home, 628 Main Street Benn., VT 05201 to help the family with her final expenses.

To send flowers to the family or plant a tree in memory of Ida Jane Whitman (Cook), please visit our Heartfelt Sympathies Store.

Receive notifications about information and event scheduling for Ida

We encourage you to share your most beloved memories of Ida here, so that the family and other loved ones can always see it. You can upload cherished photographs, or share your favorite stories, and can even comment on those shared by others.

Posted Nov 06, 2020 at 04:11pm
What a beautiful woman. She used to go into Panache when I worked there. I will always remember how sweet she was. May her spirit and dancing live on forever ❤️
Comment Share
Share via: 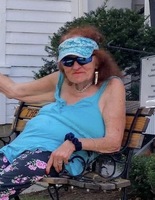