To share your memory on the wall of Harold Barney, sign in using one of the following options:

He was born in Bennington, VT August 17, 1943. He was the son of the late Harold and Eileen (Remillard... Read More
Harold J. Barney, 76, a resident of Main St. in Pownal, VT died Tuesday November 19, 2019 at his residence following a brief illness.

He was born in Bennington, VT August 17, 1943. He was the son of the late Harold and Eileen (Remillard) Barney. Harold received his education in Bennington and Vergennes, VT.

He married the former Karen A. Marino on January 30, 1963 at Saint Francis de Sales Church in Bennington.

In earlier years Harold had been employed at Warren Wire and Stanley Tools. He later worked at the Union Carbide Corporation (Eveready) from which he retired.

An avid outdoorsman Harold enjoyed hunting and in earlier years fishing. He loved sports and in his younger years he played flag football, softball and basketball. He also enjoyed bowling and playing golf. He was a Life Member of the Bennington Lodge of Elks # 567.

Survivors include his wife, Karen Barney of Pownal, VT. Three sons, Craig Barney and Catherine Doucette of Hoosick Falls, NY, Christopher Barney and Marcy Rodd of Bennington and Brian Barney and Jessica of Bennington. Two granddaughters, Aerial and Kendall Barney and a grandson Aaron Barney. A sister Rose Churchill and her husband Bill of Bennington and a brother Doug Barney and his wife Colleen of Old Orchard, Maine. Along with several nieces, nephews and cousins. He was pre-deceased by a brother Nelson Barney.

Friends may call at the Mahar and Son Funeral Home on Monday from noon until the time of the service.

The burial will follow the service in the family lot at Park Lawn Cemetery in Bennington.

In lieu of flowers contributions in memory of Harold J. Barney may be made to the Elks Silver Towers through the office of the Mahar and Son Funeral Home 628 Main St. Bennington, VT 05201. Guest book condolences may be made at www.maharandsonfuneralhome.net
Read Less

To send flowers to the family or plant a tree in memory of Harold J. Barney, please visit our Heartfelt Sympathies Store.

We encourage you to share your most beloved memories of Harold here, so that the family and other loved ones can always see it. You can upload cherished photographs, or share your favorite stories, and can even comment on those shared by others.

Posted Dec 06, 2019 at 06:13pm
Dear Karen and family. I just got the news today of Harold’s passing. So many memories from growing up together and you two as a young couple. You were both always so kind to Mom and Dad. Please care for yourselves during this difficult time. Hugs. Sally Barney Mangan
Comment Share
Share via:
EC

Posted Nov 24, 2019 at 10:37am
Karen and Harold stood up for us at our wedding 25 years ago. Darrell was one of those people that was very easy to be around. Always made you feel comfortable at his house or wherever you were with him. He will be greatly missed by his family. Rest in peace Harold.
Comment Share
Share via:
EC

Sorry for the type o
DP

Posted Nov 22, 2019 at 02:35pm
Dear karen and family, I am so very sorry to hear about Harold! God bless all of you! Love Diane
Comment Share
Share via: 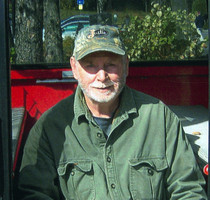