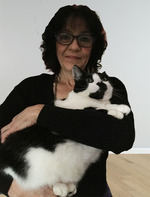 She was born in Bennington on January 18, 1959 and was the daughter of the late Joseph and Freida (Cross) Pello. She received her education in local schools. She married Keith Gardner, who survives. For many years Freida was a waitress in the area at various restaurants. She later was employed by the Factory Point Bank in Manchester as a Personal Banker, and part time at the Potter Hill Barn in Hoosick, New York.

She enjoyed time with the family, cooking, decorating, reading, and crocheting. Freida volunteered at the after school program at Shaftsbury Elementary School, and ran the school store as well. Freida was a Girl Scout leader.

Besides her husband, she is survived by one daughter, Jessica Gardner of Bennington, one granddaughter Destiny Gardner of Shaftsbury, Vermont and one Brother, Bryan Pello of Bennington. She is predeceased by her parents.

Services will be held in the spring at the Center Shaftsbury Cemetery. There are no calling hours scheduled.

Memorial contributions may be made to the American Cancer Society, through the Mahar and Son Funeral Home, 628 Main Street, Bennington, VT 05201.

Guestbook condolences may be made to www.maharandsonfuneralhome.net