To share your memory on the wall of Esther Murphy, sign in using one of the following options:

Born in Pittstown, NY on February 17, 1926, she was the daughter of the late Jay and Helen (Smith) Brock. She received her education in New York state.

In earlier years Esther was employed at EZ Mill in Bennington and later at Stanley Tool in Shaftsbury for twenty years until the time of her retirement.

Due to the issues with the COVAD-19 virus private services will be held at the convenience of the family with burial to take place in the family lot in St. Johns Cemetery in North Bennington.

Should friends desire memorial contributions in Esther Murphy’s memory may be made to the Bennington Rescue Squad through the office of the Mahar & Son Funeral Home, 628 Main Street, Bennington, VT 05201.

To send flowers to the family or plant a tree in memory of Esther B. Murphy (Brock), please visit our Heartfelt Sympathies Store.

Receive notifications about information and event scheduling for Esther

We encourage you to share your most beloved memories of Esther here, so that the family and other loved ones can always see it. You can upload cherished photographs, or share your favorite stories, and can even comment on those shared by others. 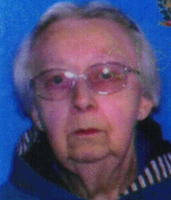