To share your memory on the wall of Ernest Harwood, sign in using one of the following options:

Print
Ernest Dennis Harwood, 90, and his wife Cathleen Mary Hier Harwood, 86, residents of Cleveland Avenue, Shaftsbury, died peacefully within hours of each other on Saturday September 12, 2020 at their home surrounded by their family.

Ernes... Read More
Ernest Dennis Harwood, 90, and his wife Cathleen Mary Hier Harwood, 86, residents of Cleveland Avenue, Shaftsbury, died peacefully within hours of each other on Saturday September 12, 2020 at their home surrounded by their family.

Ernie and Cathleen were married at the Bennington Methodist Church on July 3, 1954. They recently observed their 66th wedding anniversary.

In earlier years Ernie worked at the former BenMont Paper company in Bennington and then was employed at the Stanley Tools Eagle Square plant in Shaftsbury until his retirement in 1992. Cathy served for ten years as the Shaftsbury Town Clerk. After leaving the town office she spent the next 20 years working in Bennington at both the Vermont District Court and Family Court until her retirement

Ernie was an avid outdoorsman he enjoyed hunting, fishing, working in his flower gardens and raising hunting dogs. He was a longtime member of the Hale Mountain Fish and Game Club. Cathy was a very active member of the Shaftsbury Methodist Church. She loved all of the various arts including oil painting and interpretative dance. She was also active in the Special Olympics Program for many years

The funeral will be held from the Shaftsbury Methodist Church on Saturday September 19, at 11:00 a.m.

Friends may call at the church on Saturday from 10:00 a.m. until the time of the service.

All Covid 19 procedures will be followed including the wearing of masks and social distancing.

Should friends desire memorial contributions in memory of Ernest and Cathleen Harwood may be made to either the Vermont Special Olympics or the https://vtfishandwildlife.com/get-involved/donate/vermonts-land-and-facilities-trust-fund through the office of the Mahar & Son Funeral Home, 628 Main Street, Bennington, VT 05201.

To send flowers to the family or plant a tree in memory of Ernest Dennis Harwood, please visit our Heartfelt Sympathies Store.

Receive notifications about information and event scheduling for Ernest

We encourage you to share your most beloved memories of Ernest here, so that the family and other loved ones can always see it. You can upload cherished photographs, or share your favorite stories, and can even comment on those shared by others.

Jake and Lisa Harrington sent flowers to the family of Ernest Dennis Harwood.
Show you care by sending flowers

Posted Sep 22, 2020 at 09:00am
Gail, I'm so sorry to hear of your mom and dad's passing. I know it's hard for you and your brother's and sister. I feel it's such an added blessing for your folks to be at their own home when the time came, surrounded by their loving family. I still think of all the good and fun things at your house when we were in school. You're all in my heart and prayers. Michelle Niles
Comment Share
Share via:
JH

Posted Sep 16, 2020 at 11:03am
Our thoughts and prayers are with the entire family. God bless and may they Rest In Peace.

Posted Sep 15, 2020 at 09:03pm
May the family find comfort in the many memories they hold dear to their heart. With deepest sympathy to all.
Comment Share
Share via:
GB

Posted Sep 15, 2020 at 06:43pm
So sorry to hear of Ernie & Cathy’s passing. I have found memories of going to their house on Cleveland Ave for larger family gatherings when I was growing up. Later I would see Cathy (& Frankie) if I attended Church services when I was in town visiting my parents. Cathy had a beautiful singing voice. They will both be sorely missed.
Comment Share
Share via:
GB

Thank you Sandy. We love you! 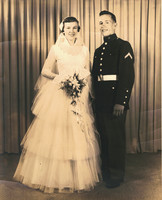