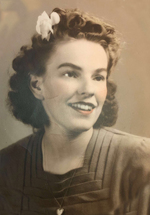 Eleanor was born in North Adams, Massachusetts on March 7, 1921, and was the daughter of the late Arthur and Bernice (MacIntyre) Daniels. She received her education in North Adams Schools. She is the widow of Everett Carl Brown. For several years, she worked at Sprague Electric Company as an Assembler. Eleanor was an avid seamstress and a good housekeeper.

There are no calling hours or services scheduled at this time. The Mahar and Son Funeral Home in Bennington, Vermont is assisting the family at this time.