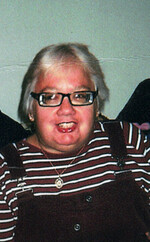 Darlene was born on December 6, 1955 to Julie (Blodgett) and Bernard Anthony Galipeau at Putnam Memorial Hospital in Bennington, VT. Darlene was their fourth child.

In her first few years Darlene would have to have three operations on her crossed eyes. Darlene and her parents would travel to Boston’s Women’s and Children’s Hospital for the surgeries. Darlene would return home to begin her many years of speech therapy. “Darlene did not speak for years but somehow we always knew what she wanted. She was our “special sister” and remained that way for the rest of her life. She was grandfather Gailpeau’s “special angel”. He would always take her for rides and sing to her. We were always taught by our parents to watch over her and each one of us did.”

Darlene attended the Red Brick School for her elementary education until “mainstreaming” was established. She would then attend Mount Anthony Union High School where she graduated in 1975. After graduating, Darlene continued living with her mom and dad while attending group activities at United Counseling Service in Bennington. She would help her parents with their household chores. She loved to fish and spent her summers with her family at their camp on Lake Champlain. Her dad would come up on the weekends after working all week and take her fishing. They had an amazing bond. He would help her with everything and never spoke harshly to her. She loved camping, doing homework that anyone would give her to do and watching television. She especially loved westerns. Her favorite shows were “Wells Fargo” with Jim Hardie, “The Lawman” with Marshall Troop and Deputy McKay and Laramie with Jess and Slim. Her favorite cowboys were Deputy McKay and Jim Hardie. She watched every episode.

Upon the death of her parents, Darlene continued to live with her sister Charlene Martin and her brother- in- law Gary Martin. She loved “eating out” with Gary and Charlene at her favorite restaurants, The Blue Benn Diner and the Burger Den. They loved her so much and thought of her as theirs. Gary had two honeys, his wife was his # 1 honey and Darlene was honey #2. She loved it when he would call her honey 2.

The funeral will be held from Saint John the Baptist Catholic Church on Friday January 29, 2021 at 10:00 a.m. where the Liturgy of Christian Death and Burial will be offered.

The burial will follow in the family lot at Saint John’s Cemetery in North Bennington.

If friends desire contributions in memory of Darlene Galipeau may be made to either Saint Jude’s Children’s Hospital or United Counseling Service through the office of the Mahar and Son Funeral Home 628 Main St. Bennington, VT 05201. Guest book condolences may be made at www.maharandsonfuneralhome.net