To share your memory on the wall of Barry Wilson, sign in using one of the following options:

Barry S. Wilson, 53, a resident of School Street in Bennington, died on Sunday, May 31, 2020 following a brief illness.

He was born on February 11, 1967 and was the son of Frank ... Read More
BARRY WILSON NOTICE
BENNINGTON, VERMOMT

Barry S. Wilson, 53, a resident of School Street in Bennington, died on Sunday, May 31, 2020 following a brief illness.

He was born on February 11, 1967 and was the son of Frank Wilson and the late Margaret (Billert) Wilson. He received his education in Bennington, and is a graduate of Mount Anthony Union High School. Barry attended the Berkeley Music Academy in Boston. Barry was an amateur musician and an avid movie buff. He was a former Big Brother, Big Sister Volunteer.

Private services will be held on Friday at Park Lawn Cemetery in Bennington.

Memorial contributions may be made to the Cancer Center Community Crusaders through the Mahar and Son Funeral Home in Bennington.

Guestbook condolences may be left at www.maharandsonfuneralhome.net
Read Less

To send flowers to the family or plant a tree in memory of Barry S. Wilson (Wilson), please visit our Heartfelt Sympathies Store.

Receive notifications about information and event scheduling for Barry

There are no events scheduled. You can still show your support by sending flowers directly to the family, or planting a memorial tree in memory of Barry S. Wilson (Wilson).
Visit the Heartfelt Sympathies Store

We encourage you to share your most beloved memories of Barry here, so that the family and other loved ones can always see it. You can upload cherished photographs, or share your favorite stories, and can even comment on those shared by others.

Posted Jun 04, 2020 at 09:34am
Frank and Steve,
We are very sorry to hear of your loss of Barry. We are thinking of you both at this sad time.
Art and Sandy Hyde
Comment Share
Share via: 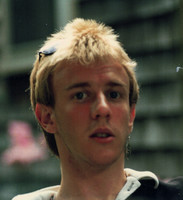