To share your memory on the wall of Arlie Greene, sign in using one of the following options:

Print
Arlie F. “Skip” Greene, 90, a resident of Emma Street in Bennington died Monday May 4, 2020 at the Bennington
Health and Rehabilitation Center following a brief illness.

He was born in Shaftsbury, VT August 28, 1929. He was th... Read More
Arlie F. “Skip” Greene, 90, a resident of Emma Street in Bennington died Monday May 4, 2020 at the Bennington
Health and Rehabilitation Center following a brief illness.

He was born in Shaftsbury, VT August 28, 1929. He was the son of the late Arlie E. Greene and Bessie A. (Beagle) Greene. Arlie received his education in Shaftsbury, VT. He served in the National Guard before being drafted into the Army. He was stationed in Paris, France during the Korean War and received the National Defense Service Medal.

Arlie married the former Esther Pacitto on December 31, 1955. They had two children; Fay Schroeder and Tim Greene. Mr. Greene is survived by his children and their families, Fay Schroeder and her husband Charles of Charleston, South Carolina and Tim Greene and his wife Katie of Prospect, CT along with two grandchildren Karlyn Esther Greene and Nicholas Greene. Esther died October 27, 1988.

He later married the former Nancy Eggsware on July 15, 2000.

Arlie was employed as an Operating Engineer by Local 478 in CT.

He was a member of the American Legion Post 13, the VFW and the Bennington Eagles Club. Arlie enjoyed hunting, collecting guns and playing horseshoes.

If friends desire contributions in memory of Arlie F. Greene may be made to the VFW Post 1332 in Bennington through the office of the Mahar and Son Funeral Home 628 Main St. Bennington, VT 05201.

To send flowers to the family or plant a tree in memory of Arlie F. Greene, please visit our Heartfelt Sympathies Store.

Receive notifications about information and event scheduling for Arlie

We encourage you to share your most beloved memories of Arlie here, so that the family and other loved ones can always see it. You can upload cherished photographs, or share your favorite stories, and can even comment on those shared by others.

Posted May 08, 2020 at 09:23am
Skip was a good friend , would run into him at the Eagles or VFW and was always friendly he will be missed . Always willing to help if you needed help with a lawn mower or small engine and did excellent work. Miss you Skip Tom Arendt
Comment Share
Share via:
RF 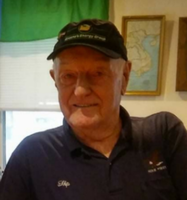