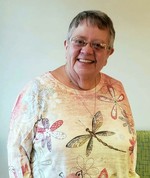 Judith A. Pennock, 72, longtime resident of Union Street in Bennington, died on August 22, 2019 at the Centers for Living and Rehabilitation following a courageous three-month battle with pancreatic cancer. Judy was born in Pittsfield, Massachusetts on August 13, 1947, the first child of Florence and Maurice Pennock. She grew up in Manchester and graduated from Burr and Burton Academy, then graduated with a teaching degree from Castleton State College. After teaching a year at St. Francis, Judy served as a second-grade teacher in the Southwest Vermont Supervisory Union for the next 31 years, most of which was spent at Monument Elementary. Her love of children and expert teaching practice affected the lives of many.

After retiring from the SVSU in 2000, Judy worked at Evans' News and continued to be a fierce advocate of all things Bennington. A fixture on Main Street and always ready to volunteer within the community, Judy participated in many annual events such as Mayfest, Midnight Madness, and A Night to Shine. She also volunteered at several local institutions such as Bennington Project Independence, The Bennington Free Library and in local classrooms.

Judy was an expert storyteller, entertaining children of all ages at the Village Booksmith and in area schools. She enjoyed sharing the many beautiful photos she took of local landmarks, flowers and families. High school students also sought out Judy's talents to take their graduation photos. She was known for her love of the ocean and looked forward to annual trips with her sister to Ogunquit, Maine. She will also be remembered for her love of the Boston Red Sox and New England Patriots.

Judy’s family would like to extend their warmest appreciation to all of the staff at the Centers for Living and Rehabilitation for the loving and professional care that was extended to Judy during her illness.
She is survived by her devoted sister and brother-in-law, Jill and David Frost of Danby, Vermont, and her beloved niece, Emilee of Old Orchard Beach, Maine. She leaves behind family friends Katherine Marcoux, of Bennington, Nathaniel Marcoux and his wife Colleen, also of Bennington, and Jason Marcoux, of East Greenbush, New York. Judy also leaves behind countless other important people, who will miss her friendship, quick wit and caring manner. Friends and family will also miss her impeccably planned annual Christmas Eve party, and her unparalleled generosity to those in need.

In lieu of flowers, donations may be made to UCS Early Childhood Services through the office of the Mahar & Son Funeral Home, 628 Main Street, Bennington, VT. 05201. The family also requests that you do something nice for someone in need, as Judy has done so many times before.