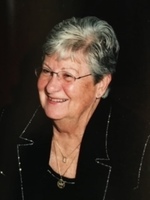 Our beautiful mom, Mary Scarey Dailey, joined the angels today. We know that the vast emptiness her leaving creates will be eased by the memories we made together and by the glimpses of her we catch in each other: her 6 kids, 21 grandkids, and 18 great grandkids—with 2 more soon to join the clan.
Our mom was born in Plainfield, NJ, on May 30, 1928, to Agnes (Regan) Scarey and John Edward Scarey. The Depression arrived on the heels of her birth, and her parents relocated the family to a farm in North Bennington, VT. Growing up on the farm, Mom did not relish wearing dresses her mother fashioned out of grain sacks, nor did she enjoy spreading manure from the back of the wagon with her brother John. But she did enjoy sneaking to the river for a swim.
Mom attended North Bennington High School and was a member of the drama club. In 1946, during her senior year, she received the Balfour Award for "most outstanding" senior.
Mom and Dad married on Thanksgiving Day in 1949. This November marks their 70th anniversary.
The area hospitals were important to Mom and while residing in North Bennington she became a Gray Lady volunteer at SVMC. She also became the first female member of the SVMC Hospital Board. When she and Dad moved to Hedges Lake full time, Mom became a Pink Lady volunteer at Mary McClellan Hospital.
In her view education was indispensable. During a time when it was rare for women to be educated beyond high school, Mom graduated with a degree from Saint Joseph Business School. She ran for and was the first woman elected to the MAUHS School Board. Education was a solid priority and her diligence paid off: each one of us received our college degree.
Experiencing the world became an essential part of her life; and once she became an empty-nester, she and Dad travelled around the world twice, took various trips to Europe, Japan, Russia, China, and the U.O. They
explored South America several times and went to Antarctica on one of these excursions. She appreciated the enrichment that experiencing different cultures and societies brought to her life. When asked if there was a place she would like to visit again, without hesitation she said, "Jerusalem." She explored her ancestral roots while on several trips to Ireland and was able to locate her grandmother's home in County Mayo.
Mom's faith was unshakeable. It was an integral part of her, and she viewed it as all-inclusive. In her world everyone was welcome in God's home. When the Charterhouse of the Transfiguration (Carthusian Monastery) was built on Mount Equinox, the monks asked Mom to sew altar clothes and vestments for them. She happily did so and was the last woman to leave the cloistered inside of that stark, spiritual structure.
She was a proud member of Red Sox Nation and was wide-eyed and lovin' it when she attended her first Red Sox game. We will remember our quiet, non-judgmental mother scolding the players through the TV if they botched a play. A true fan.
Through all of this, concern for her family was paramount. None of us ever doubted her love for and devotion to each one of us. She made sure we were fed 3 meals every day. She sewed clothes for us and kept us cozy and warm by knitting sweaters, hats, mittens and scarves. And each creation was lovingly done with the wearer in mind.
She recently said, "It's not the dying I mind, it's leaving everyone I love." Exactly. We know that as we are waving goodbye to her, there are those waiting on the opposite shore who are smiling and beckoning her into their arms, welcoming her home.
She is survived by her daughters Marilyn (John) Woodard and Carol (William) Kelley; sons William (Linda), Thomas (Marna), Richard (Patty), and Terrence (Kathy). And as previously mentioned enough grand and great grandkids to create 4 baseball teams with back-up.
She was predeceased by her husband William, sister Catherine, brother John, and granddaughter Jessica.
Calling hours will be Friday, July 19, 5:00pm to 7:00 p.m. at the E.P. Mahar and Son Funeral Home, 628 Main Street, Bennington, VT. A mass will be held 10:00 a.m. Saturday, July 20, 2019, from St. Patrick's Church in Cambridge, NY, with internment to follow at St. John The Baptist Cemetery in North Bennington, VT.
We ask that people do acts of kindness for others in Mary's name. Donations can be made to the SVMC Cancer Center and The Second Chance Animal Shelter in Shaftsbury through the office of Mahar and Son Funeral Home, 628 Main Street, Bennington, VT 05201.
Guestbook condolences may be made at www.maharandsonfuneralhome.net